The administration of George C. Bradley has presented Paine College with a unique set of integrity issues the examination of which have deeply eroded confidence in the continued viability of the college as a going concern under his leadership.  Prime examples are the following:

George C. Bradley took office as the 14th President of Paine College in January of 2008.  He formerly served as Executive Vice President, Claflin University, in Orangeburg, South Carolina from 2001 to 2007. [click here to see a copy of Dr. Bradley’s resume]

Prior to coming to Paine College and prior to interviewing for the position, Bradley fathered an out-of-wedlock child to a former student at Norfolk State University. (His resume does not mention this child but does mention his other children by wife, Tina Marshal-Bradley).  Reportedly, this fact was never disclosed to the Board of Trustees by Bradley when he disclosed his family relations at the time of his application and interview for the position of President of the College.  The Board of Trustees was subsequently, informed of this fact in a Memorandum authored by former Trustee, and then chairman of the Audit Committee, Wayne B. Kendall, dated April 20, 2012. [click here to see a copy of the Memorandum]

The circumstances of the disclosure by former Trustee Kendall was spurned by a Dept. of Education Office of Inspector General criminal investigation into allegations that Bradley had misappropriated unaccounted for Title III funds to make payments to the mother of this child.  As reported in the Memorandum, Paine College was served with an Income Deduction Order for child support owed by Bradley for this minor child, in October of 2010, from the State of Virginia Dept. of Social Services.  According to the Memorandum authored by Kendall and sent to members of Board of Trustees he (Kendall) had been contacted by former senior employees of Paine College who reported to him that they had been interviewed by law enforcement officers from the U.S. Department of Education concerning their knowledge of the misappropriation allegations.  In the April 2012 Memorandum, Kendall reported the statements made to him by these former employees of the College, to the Board of Trustees, who at the time took no action.  Kendall was subsequently removed from the Board of Trustees.  No reported result of the U.S. Department of Education investigation into these issues has ever been made public.

The integrity issues identified by the above facts are: (1) lack of candor to the Board of Trustees concerning his family relations by failing to disclose to the Board his relationship with a student at another institution resulting in the paternity of an out-of-wedlock child; (2) his failure to accept financial responsibility for the support of the minor child except upon compulsion by the State of Virginia; and, (3) the as of yet unresolved issue of whether college funds have been misappropriated to the support of the child and the child’s mother.

Lack of Candor to the Board of Trustees regarding Application for Employment to Southern University.

In March of 2011, it came to light from internet news sources that Bradley had applied for and been named as one of 10 finalists to the position of Chancellor for the Baton Rouge campus at Southern University in Louisiana.  When confronted with this fact, in a letter to the Board of Trustees, dated March 30, 2011, he denied that he had applied for the position.  Instead, he said he was nominated by others in higher education for consideration for the position.  When asked to withdraw his nomination he initially stated that it would be disrespectful to those persons in higher education who had nominated him for the position to withdraw his nomination.  He formally withdrew his nomination in an email, dated April 1, 2011, to the Southern University search firm conducting the search. [click here to see a copy of email to be withdrawn from consideration for the Chancellor’s position]

Perhaps even more disturbing about the matter is the fact that two, then senior employees at Paine College, wrote letters of recommendation to the Southern University search firm conducting the search recommending Bradley for the position.   Both employees, Brandon P. Brown, then Vice President for Institutional Advancement, and W.C. Howard, Special Assistant to the President, wrote letters of recommendation to the Southern University search firm.  As it turned out, the persons in higher education that had been referred to, by Bradley, in his letter to the Board of Trustees, as having nominated him for the position turned out to be two fellow subordinate Paine employees.  At the time, Bradley had 3.5 years left on his existing contract with the College and had asked the Board of Trustees to extend his contract. In a board meeting, when presented with a letter he had authored to the search firm requesting consideration for the position Bradley still insisted that he had never applied for the position. The Board, having found his explanation sensational, and unworthy of belief, voted to give him a written reprimand for his lack of honesty and forthrightness concerning the matter. 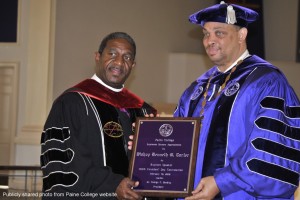 President Bradley has formed a close association with CME Bishop Kenneth Wayne Carter.  Since the College was founded by a partnership of the CME church and the United  Methodist Church, both organizations have authority to appoint an equal  number of members to the college’s  Board of Trustees under the college’s  charter.  By charter, the state bishop  of each church organization is automatically a  member of the Board.  Bishop Kenneth Wayne Carter is the CME bishop for the State of Georgia.  He is therefore an automatic member of the Paine College Board of Trustees.  More importantly, he is also by tradition the Vice-Chairman of the Board of Trustees.

Most recently, he gave the keynote address at the college’s 130th Founder’s Day Convocation. Bishop Carter was indicted in June 2008, by a Fort Worth, Texas, Tarrant County, grand jury on charges of sexual assault on a then 46 year old man.  The alleged victim, Rev. Allen Scott, was himself an ordained CME minister.  The criminal charges were ultimately dropped against Bishop Carter for insufficient evidence. A civil case was brought by Rev. Scott, nevertheless.  Even though the criminal case was dropped, a trial of the civil case proceeded against Bishop Carter, his supervising Bishop, William Graves, and the CME church, as an organization.  This trial resulted in a jury verdict of $450,000 against Carter and the CME church.  The CME church was subsequently relieved of the judgment by order of the trial judge and the jury’s verdict was ultimately imposed only on Bishop Carter.  The official appellate court opinion upholding the rulings of the jury and trial judge is available on the internet at: http://www. http://law.justia.com/cases/texas/second-court-of-appeals/2012/02-10-00434-cv.html.

The written decision of the court outlines disturbing details of the assault.  According to Scott, Bishop Carter inserted his penis into the mouth of Scott before ejaculating on him and in his mouth.  The version of events tendered by Carter was only slightly less repulsive.  According to Carter, the entire event was consensual and Scott was the aggressor.  According to Bishop Carter, he (Bishop Carter) only masturbated in his own hand before he allowed Scott to willingly perform oral sex upon him.  The jury chose to believe Scott’s version of events. Other testimony revealed that Bishop Carter: (1) was previously a band director in the Fort Worth Independent School District and that he had been reported to the school district authorities for masturbating in a hotel room he shared with another band director while on a band trip to Disney World; (2) his school principal had received complaints that Carter had offered college aged boys money for sexual favors which she reported to district authorities; (3) another individual testified that he had seen Carter masturbating in a bathroom stall at Carter’s church, whereupon Carter grabbed him and was pulling at his clothes; and (4) a pastor, a reverend, and an elder of the church all testified that rumors had abounded for years that Carter was homosexual and that in 1990 in a church in Mississippi a young male musician had stood up in church and announced that he wanted Carter to stop bothering him.

The integrity issues surrounding the appointment of a person with forcibly aggressive sexual tendencies as the vice-chairperson of the college’s Board of Trustees are obvious.  Carter’s past aggressive sexual tendencies have already cost him, the CME church and their insurer $450,000. The appointed position he holds as the vice-chairperson of the college’s Board of Trustees is an important position on the board as he presides over the Board of Trustees in the absence of the Chairperson of The Board of Trustees.  A person of compromised integrity is the last person a college should want in such a position as such a person is more prone to pressure from the administration to overlook financial and other deficiencies because of his own exposure to a compromised past history.